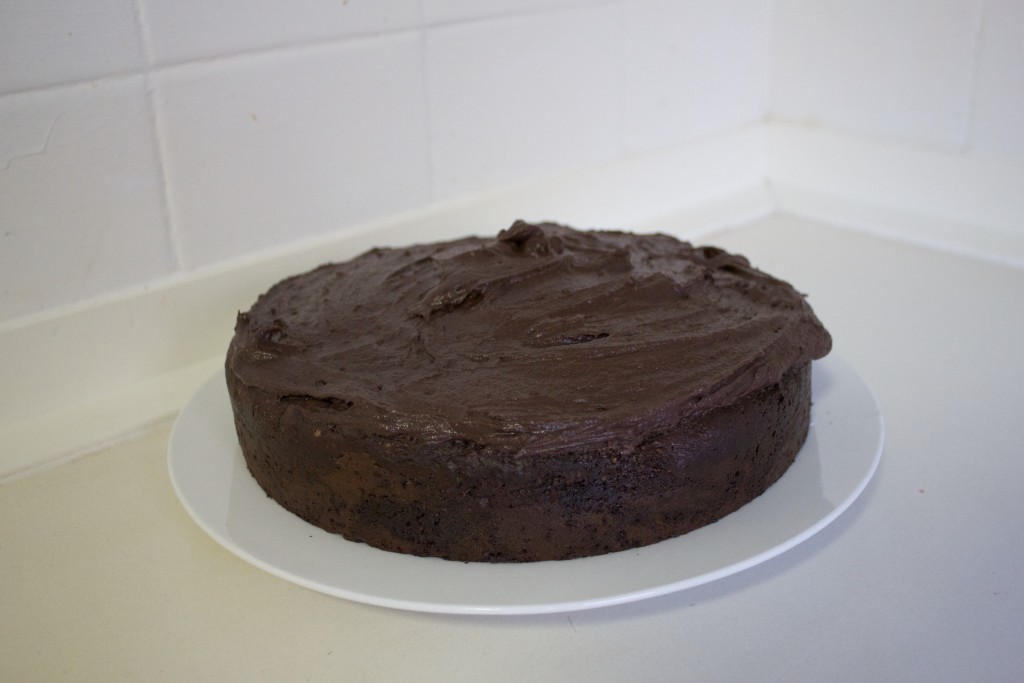 There is something so comforting about a piece of moist chocolate cake, still slightly warm from the oven and covered in a buttercream icing. Partnered with a cup of tea and a good book, it’s a lovely way to spend an hour or two. Depending on how good the book is, I may treat myself to a second slice of cake because I think cake is always best on the day you bake it. That’s how I justify a second slice to myself anyway.

I do freeze the surplus, as there is only so much cake two can eat. A slice of cake slightly warmed in the microwave is almost as good (probably because there are no bowls and beaters to clean!)

I have slightly simplified this recipe from Fauzia’s Kitchen. Using yoghurt in cake makes for a really moist and light crumb and the recipe is so easy. Sometimes I haven’t had quite enough yoghurt, so I have added a bit of milk or sour cream to make up the difference.  I have also substituted buttermilk (or milk soured with lemon juice or vinegar) with equal success. It’s a very forgiving recipe and doesn’t take much time to bake. The hardest part I think is keeping Stuart away from the cake long enough to ice it!

I ice my cakes with about 25g of softened butter, icing mixture and cocoa with a splash of milk. It’s not very technical, I just keep adding icing mixture, cocoa and a dot of milk until it’s the right colour and consistency and there is enough to ice the cake. I ran out of icing mixture the day I iced the cake in the picture which is why the sides are naked. Alternatively, I can tell myself that’s a “sugar-less” version which makes it healthier. Ha!

Also, measuring butter in a cup is easy if you use displacement. For half a cup of butter, pour 1/2 a cup of water into a measuring cup and add butter until the water line reaches 1 cup.