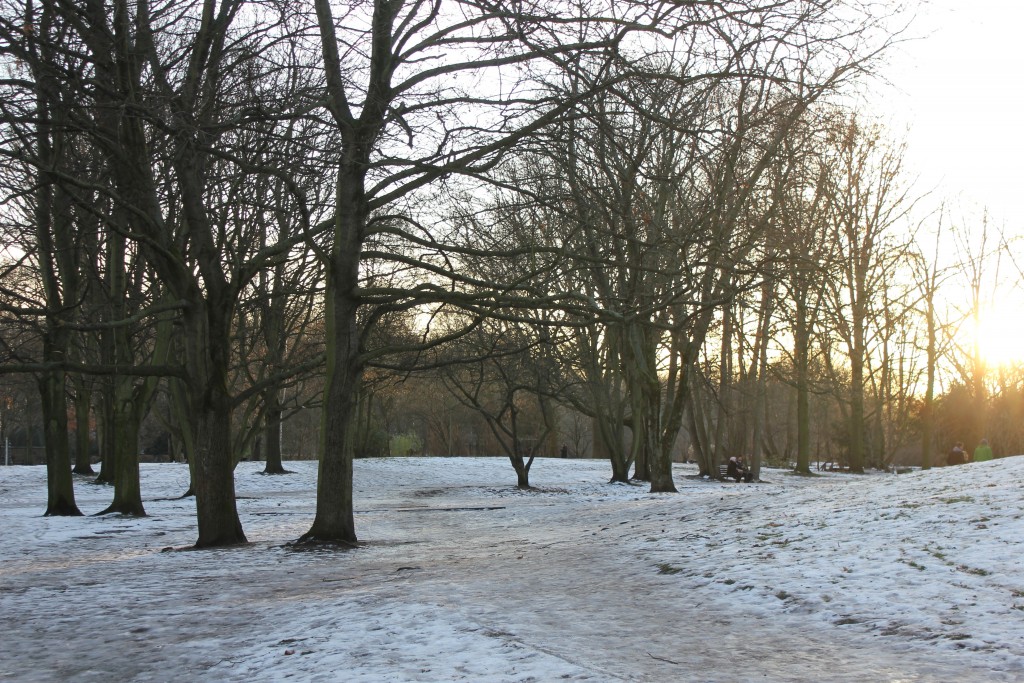 A weekend in Berlin was organised on a whim – it was 24 hours between making our bookings and drinking a German beer in Germany. Quite a novelty for 3 Australians when travelling an hour by plane would normally only land us in another state, not another country!  I didn’t have any expectations beyond beer, schnitzel, sausage, pork knuckle and history of WWII and the Cold War so by that measure, the weekend was a success. However, when someone asked the three of us us if we had a great time in Berlin we all stayed silent with tilted heads and brows furrowed, because we didn’t really. It was gritty and frosty from the snow and crunch under our feet as we walked the empty streets to the interactions we had with Berliners. It wasn’t fun, it wasn’t enjoyable but it was an experience and I am glad that we went.

We arrived in our apartment late-ish on Friday night so we were too hungry to go hunting far for food. A short walk away was a German restaurant which met our immediate requirements of beer, wine, pork knuckle and schnitzel. It rated well on the food radar, so to the slightly naff, pretty touristy Alt-Berliner Wirtshaus we went. I think the excitement of being in another country so easily made the food and drink taste even better, despite the sullen waitress who plonked our meals on the table. The food was good, not great, but was an OK start to our weekend in Berlin.

Saturday morning started with breakfast at Chipps, it was quite hard to find a breakfast option that was open before 10am and that was kind of on our way. Berlin is incredibly spread out and good food is hard to find. My plate of salad with a side of eggs Florentine was OK, but expensive – I think we paid about 50 euro for three of us. We were cutting it fine for our 11am tour and since we hadn’t quite worked out the public transport system, we caught a cab to Gesundbrunnen station. We bought our tickets for the tour which took us through a nondescript green door in the subway station into a labyrinth of tunnels used as a bunker during WWII. It was fascinating, our tour guide was very knowledgable and gave us a really good insight into what it was like for the Berliners during the frequent air raids. The Nazis didn’t have enough time to build sufficient bunkers for civilians so the underground tunnels which were originally constructed for the subway workers were turned into basic shelter for people who did not have their own bunker or cellar at home. The bunker wasn’t as well equipped as others so people were only allowed to stay for the duration of the raid and then were required to return home. Sometimes there were several raids in one night so families would walk between their home and the bunker throughout the night.  There wasn’t always electricity in the bunkers, so strategically placed glow in the dark paint highlighted paths, stairs and signs. The walls of the guard room was painted completely so that when the lights were out there was enough light from the walls to enable the bunker guards to continue their work for an hour or two until the light faded or the power came back on.

Our next tour wasn’t due to start until 3.30pm so I thought we would go to a nearby brewery for a drink and a beer to while away the hours. The area around the station was pretty desolate and unwelcoming and unfortunately one train stop away in Wedding wasn’t much better. A combination of streets devoid of people, littered paths and shuttered shops made us feel a little unsafe wandering the streets trying to find Eschenbrau. After following a series of signs like breadcrumbs through an urban jungle we finally found it and it was CLOSED on SATURDAY AFTERNOON. We were at a loss, there was nothing around so we caught the train back to the station and were going to wander around to find food. Our options were pretty limited so we found free wifi in the shopping centre and tried to find somewhere decent to eat. We had zero luck – even the options in the shopping centre were dire so we went back to the train station for McDonalds.

Our next tour was about the Berlin wall and the various methods of escape attempted by the people of East Berlin. Our tour guide was a little kooky but it was quite an adventure – we were given a brief history of the Cold War, told about the progression of construction of the Berlin Wall and how determined people of East Berlin managed to make their escape. Initially they used the “doppelgänger” method where a West Berliner would visit the East on a day visit, give a passport to someone who looked similar to the photo and the person would make it across the border. As the border gradually tightened, people needed to try other methods of escape such as through the subway tunnels where they could flag down a West Berlin train that needed to travel through a small part of East Berlin. The train drivers would stop the train, pick up their passengers and then drop their cargo in West Berlin. Sewerage pipes were another option, disgusting but not for the desperate who saw it as their only chance of a better life. Eventually, the pipes were blocked off too so the final option was to dig a tunnel. Over 70 tunnels were dug which assisted with the escape of about 300 people. Digging the tunnels were a risk to all involved and the Stasi were constantly on the look out – a simple pram left out in the open by a mother who took just her baby in the tunnel would give away the location of a tunnel. The Stasi would wait patiently until the next night and catch people trying to make their escape. After weeks or months of work and a night or two of escapes the tunnel was compromised, so the diggers, usually uni students, had to start again.

The tour ended about 5.30pm so we asked our tour guides (who were about our age) for any recommendations for a nearby place to eat and drink. The cagey response really said a lot – the real Berlin is just for Berliners, like the tunnels we had just explored most of the city and culture is underground and hard to find unless you know where to look. Thankfully, our research finally paid off and we ended up in CIVILISATION with HUMANS and TRAFFIC on our way to dine at Salt n Bone. It’s a gastropub staffed by English and Irish waitstaff, so really we could have been anywhere in the world, but it was comfortable, warm, the service was friendly and the food and drink was delicious. Stuart and Louis were working their way through the boutique beer list and were pretty impressed with the selection. Unfortunately the wine list wasn’t as extensive so they didn’t make it all the way to the bottom before I was ready for one last stop at a wine bar I spotted earlier. We went to Weinstein, a cosy wine bar specialising in German/Austrian/Hungarian wines and I had the most delicious glass of Gewurztraminer from Hungary. It was a lovely way to end our evening – Berlin was redeemed!

Our final day in Berlin started at Einstein, a quaint cafe with formal service which offers a filling breakfast at a reasonable price, we couldn’t have asked for much more! We had quite a lot planned for Sunday, I had the route marked in my head so we could walk the most direct path and maximise our time to see Checkpoint Charlie – The Jewish Museum – The Topography of Terror – The Jewish Memorial and Brandenburg Gate. Checkpoint Charlie was just that, a small post with token guards and nearby information panels which outlined the history with photos. Interesting, but the display kind of felt like an afterthought so it was a little underwhelming.

The Jewish Museum was expansive. The use of space and places for reflection was incredibly moving and the museum presented a very thorough history from around 1000 to the end of the WWII. WWII was a small (but significant) part of the Jewish story and I think it was the intention of the museum to focus on the remarkably long history, and the strength of the faith and the people rather than highlight a point in time which is well documented elsewhere.

Next stop was the Topography of Terror, a museum and place of remembrance located on the site of former headquarters of the Gestapo and SS. It was a detailed, confronting, graphic and black and white retelling of the growth and demise of the Nazi party. I walked out feeling mentally drained, but I learned a lot and I highly recommend you visit if you are in Berlin. Reading history from a book is very different to learning about it in Berlin where the place and presence give the history context. We sped past the Jewish memorial and the Brandenburg gate as we were running out of time, so unfortunately we only got a quick impression of those sites before it was time to collect our bags and head to the airport.

Up to 80% of Berlin was destroyed during WWII and the city now is a mix of elegant old buildings and newer bleak buildings blocks of lego – full of straight lines and sharp edges. I noticed a number of new buildings going up which is a sign that Berlin is changing. What really struck me about Berlin was how quickly people moved to demolish buildings and remnants of events that would rather be forgotten. Out of sight, out of mind I guess – but Berlin is still heavily stained by what occurred and I think it will take more than new buildings to allow the city to move beyond its past.