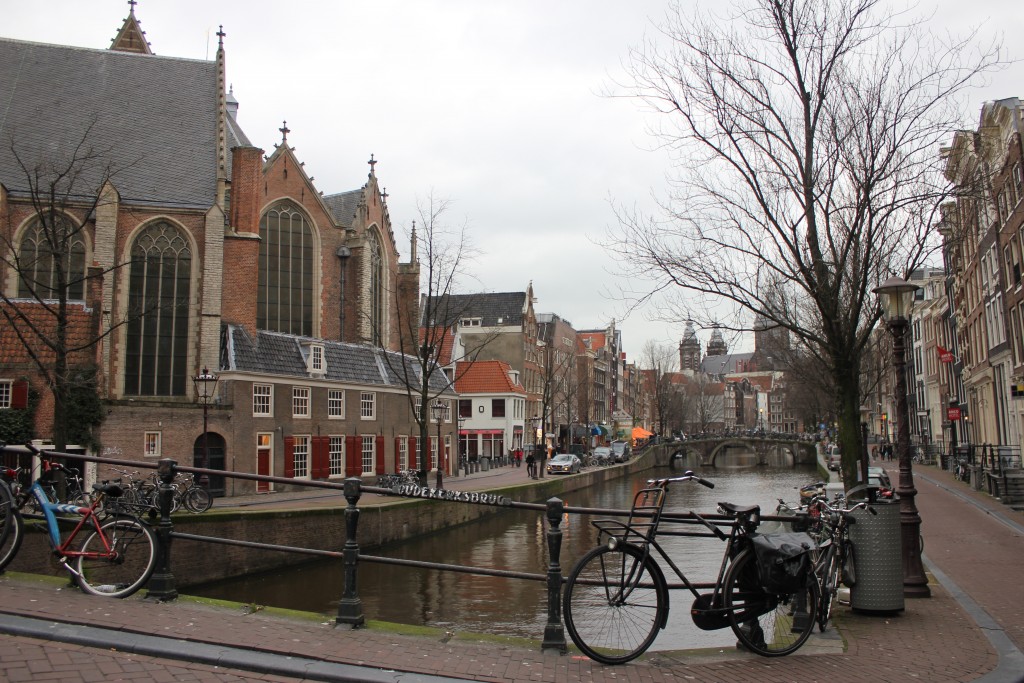 Being “normal” in Amsterdam

We have arrived in Amsterdam and settled into our apartment – my home for the next month and Stu’s home for two.

After dragging our suitcases across cobbled streets, we lugged our suitcases up a very narrow, very steep 3 flights of stairs – technically more closely resembling a ladder. The step treads are not wide enough for a full foot and when Stu ascends his size 15 feet look comically clown like in comparison to the petit stair treads. Apparently stairs like these are common in canal houses because when they were built home owners were charged council tax rates on the width of the house. The solution for the canny Dutch? Build a tall, narrow house with a tall, narrow flight of stairs of course! We dropped our bags and then huffed and puffed back down and as Stu closed the front door he turned to me and said “I thought being on the third floor was a selling point, but now I”m not so sure!”

Our first stop was a visit to the supermarket which was a short walk down the street. We had a great time meandering around the supermarket and guessing the contents of the products on the shelves from pictures and aisle location. The cheese and cured meat selection was a favourite (how many types of cheddar do people really need?!) Stu was fascinated by the fresh orange juice machine, where he spent about 10 minutes watching the process followed by others before he was game enough to try it himself. While Stu was making orange juice I was scouting out sour cream. I triumphantly grabbed what I thought was sour cream and tipped the container up so I could read the ingredients when disaster struck. Someone had thoughtfully dropped the container and put it back on the shelf so when I tipped it up, cream poured out all over my bag, my coat, my dress and my shoes. I must have looked ridiculous, standing in the fridge door in hysterics while trying (very) unsuccessfully to wipe the white goop from my clothes.

We made our way to the checkout and had clearly purchased way more than anyone else, the savvy Dutch of the small shop. The check out assistants also don’t pack your grocery bags. Instead, they speed scan all your items and drop them in the packing area for you to sort out yourself. I was unpacking the trolley at one end and my groceries were piling up at the other. I could feel the scathing looks in my back as I was clearly taking up too much space and too much time. Meanwhile, Stuart was trying to purchase reusable bags in another area when he came back and exclaimed for all to hear that the supermarket didn’t accept credit cards – which isn’t helpful when you aren’t carrying any cash. The checkout assistant sighed and pointed towards the ATM where Stu withdrew money to pay for our groceries while I was still packing bags and trying to get out of everyone’s way.

Finally the ordeal was over and we were headed to the door with my coat covered in cream and 8 badly packed, heavy bags of groceries to lug back to our apartment. I was looking forlornly at the trolley that I wanted to take with us when Stu decided we would do just that. We trundled the trolley back to our apartment just like we did when we were at university and didn’t have a car. Something relatively normal in Australia, but not done in Amsterdam judging by the pointed fingers, smirks and turned heads directed our way. We were unloading the bags into the stairwell of our apartment so Stu could return the trolley when Stu copped a serve from an aged lady of Amsterdam who was probably telling us we weren’t allowed to take the trolley from the supermarket. Stu apologised, told her we were going to return it and the lady walked away. I don’t think the message was understood. Stu was on his way to return the trolley when he overtook the same lady, received another serve and then saw her for a third time for a final statement of displeasure from the grand dame – what are the chances!

I have since found out that the Dutch have a code of unwritten rules that must be abided by and strangers have no qualms about pointing it out when you have broken a said rule. Dutch people like “normal” and I suppose in a small country with a lot of people, a self regulating society is pretty important.

The convenience of the trolley service to our apartment door was worth the wrath of the lady and the stares of the locals. Next time though I think I’ll just take my own bag and buy what I can carry, the “normal” thing the people of Amsterdam do.